An ERISA Trustee’s Duty of Loyalty

Good fiduciary governance, whether done for a massive $10 billion pension plan or a small 401k with a couple dozen participants, comes down to a few fairly simple processes.

At its core there are six central duties an ERISA trustee is obligated to fulfill. For each of these six duties of care a fiduciary committee will adopt a policy that addresses each of these distinct duties. Finally, the fiduciary committee will identify several procedures or audits that can be conducted each year which test whether the policies, inspired by the statutes, have been fulfilled. The duty informs the policy which informs the procedures which are tested annually to demonstrate that the policy and the duty have been fulfilled.

Case Study re Duty of Loyalty

Following is an example of how this governance process would be followed for an ERISA trustee’s duty of loyalty. The US Code directs, “A fiduciary shall discharge his duties with respect to a plan solely in the interest of the participants and beneficiaries.”  This is called the fiduciary’s Duty of Loyalty or the Sole Interest Rule. This language is echoed in the Code of Federal Regulations at §2550.404a-1(a).

In response to this affirmative Duty of Loyalty, a Fiduciary Committee would first establish a policy that says something like, “It is the policy of the XYZ Co. Fiduciary Committee to discharge its duties with respect to a plan solely in the interest of the participants and beneficiaries.”

Next, the Fiduciary Committee would establish a series of procedures or audits to test if this particular duty is being fulfilled. A review of case law and recent writings on the Duty of Loyalty will identify several areas where further investigation is deserved:

1)   Loyalty by the Committee to the plan participants:

3)   Loyalty by the plan sponsor to the plan:

Further, there are additional tests that demonstrate the Duty of Loyalty has been fulfilled.

Following is a link to a eBook we developed which gives a comprehensive review of an ERISA trustee’s duties and the checklist of information that should be included in their governance records.

Always feel free to shoot me an email or give me a call if you have further questions about governance best practices for ERISA trustees. 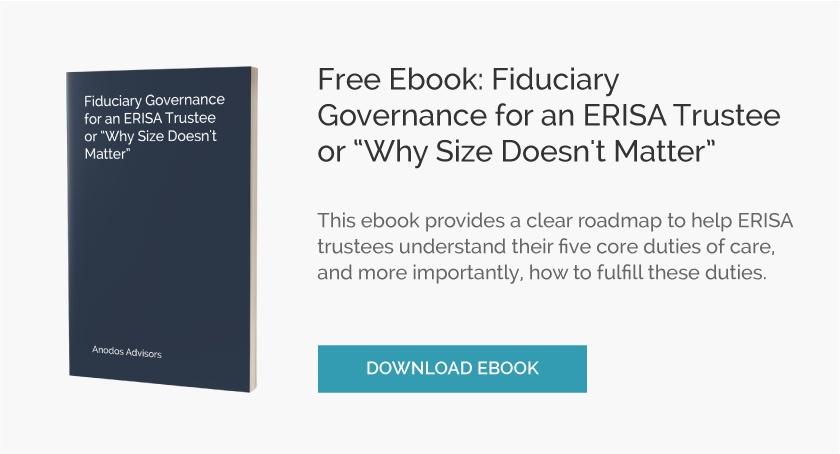 Anodos helps trustees (ERISA, individual, and endowment) save time, reduce their personal risk, and fulfill their fiduciary duties.  We do this by helping the trustee conduct audits of the money managers to whom investment duties have been delegated.  Fiduciaries have an affirmative duty to provide ongoing and independent oversight of the money managers.  What makes us unique is that we do not manage money or sell insurance.  Doing fiduciary audits, benchmarking studies, and performance attribution is all we do.

We do what trustees should do, but don't know how

Anodos develops and maintains an investment governance process for trustees so that their fiduciary duties are fulfilled.